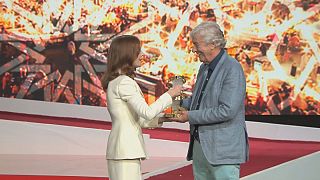 It was tribute time at the Marrakech Film Festival. Actress Isabelle Huppert was on stage to laud legendary Dutch filmmaker Paul Verhoeven.

“He makes me feel confident and gives me the opportunities to go beyond my limits. He is a great director,” she told the audience.

“I think that he shakes up people’s consciousness and that is what cinema is all about, it’s not about delivering nice, smooth objects, on the contrary, the role of cinema is to disturb.

‘It is to blur the borders between good and evil, to try and make people think about this, because everybody has an opinion on this, nobody is either completely normal or completely monstrous, everyone is a bit of both.”

The Dutch filmmaker said Huppert was the best choice to play the role of the unconventional and immoral rape victim in his latest movie, ““Elle”“:http://fr.euronews.com/2016/06/10/isabelle-huppert-glacante-et-malsaine-dans-elle.

“Isabelle has the possibility to enter a character that is not necessarily sympathetic, that you don’t necessarily identify with as an audience, but is always fascinating, and most importantly, is highly authentic,” he told euronews.

On Jemaa el-Fnaa square in Marrakesh, the 78-year old presented his 1987 American cyberpunk action film “RoboCop” which was a major box office success at the time. Verhoeven says the secret of success is to be prepared to step out of your comfort zone.

“I felt with ‘Elle’, when I was doing ‘Elle’, that I didn’t know how to do it, it was different, certainly different to all my American movies and even the Dutch ones, so for me it has to be an adventure, and I have to be a bit scared and think, ‘Can I do it?’ and ‘How am I going to do this one?’, you know,” he said.

Elle will represent France at the Oscars next February.

Paul Verhoeven’s career has spanned more than half a century. He has made both major blockbusters like ‘Robocop’, ‘Total Recall’ and ‘Basic Instinct’ as well as intimate European arthouse movies.