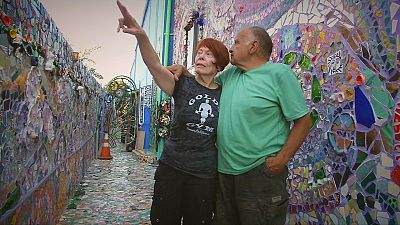 Every surface is a canvas for artists Cheri Pann and Gonzalo Duran, who have covered the walls and floors of their home in the Los Angeles neighborhood of Venice with all sort of mosaic tiles, figurines, broken plates and even coffee cups.

The story started when Duran and Pann bought the house in 1994 to build a studio in the extensive back yard.

Mosaic Tile House in Venice a monument to two decades of artistic collaborationhttps://t.co/8OxS77sNudpic.twitter.com/7FhFPMno8Y

Gonzalo Duran explained how the project began:” We both bought this place because it had a great big lot where we could build a studio. After we built the studio, my wife made some tiles for the bathroom. And that’s where all the mosaic started — in the bathroom. It was so much fun doing it, we just kept on going.”

As for the future, Pann hopes the Mosaic Tile House could eventually be listed on the National Register of Historic Places.

The Mosaic Tile House is open for tours over the weekend by appointment.