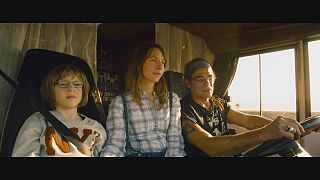 ‘Die Welt der Wunderlichs’(Wunderlich’s World) is a zany family comedy about a single mother on the verge of a nervous breakdown.

Mental disorders are an issue, a big issue, and I wanted to express that in comedy

Mimi, played by Katharina Schüttler, lives in a complicated family. Her son Felix is hyperactive, her father bipolar, her mother suicidal, her sister an egomaniac and her ex-husband a mess. That is nothing, her biggest problem is herself, as she attempts to make things right for everyone she begins to suffer.

Comedy and tragedy go together well, says Swiss-German director Dani Levy:“Mental disorders are an issue, a big issue, and I wanted to express that in comedy and in a serious way and at the same time be encouraging, that was one thing. The other was to make a movie with a female lead, a film about a woman, a film about a single mother.”

One day, Felix signs up his mother for a casting show in Switzerland. The prize could pay off their debts, so Mimi decides to go. But then the whole family wants to join the trip.

It might sound slightly exagerated, but family is a trauma we all can relate to, says actor Peter Simonischek:“Somehow anyone can relate to something in this movie, one of the characters, the dialogue, or any other connection made in the film. When the frustrated divorced ex-wife says: ‘Love – you have to know how, Love is real knowhow (laughs). That’s nice, isn’t it? To be told something like this.”

The casting show for stranded musicians fittingly called ‘Second Chance’ could very possibly bring a new turn in Mimi’s life, if only she will make it to Zürich on time.

Out in it German cinemas right now.