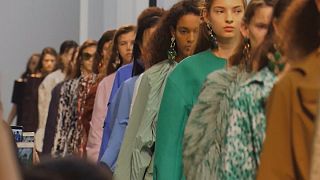 Oversized, low slung denim jeans were acid washed and ripped, but made glamorous by a coating of glossy transparent sequins.

The palettes used by Missoni were bolder than usual, with splashes of vibrant shades, enhanced with metallic shimmers of golden lame.

Marni’s collection for next spring and summer appeared to be of such a complex construction that it would seem to require a dress maid, or at least written instructions, perhaps even a video.

Accordion pleated dresses wrapped around along the bias, trailing ribbons or rope drawstrings. Tops with manifold folds and dragging cuffs fastened at the waist with a metallic buckle, and tuck into drawstring skirts. High-neck tunics with oversized sleeves and big cargo pockets were wrapped in wide kimono belts. Knitwear was gathered upward, obscuring the practicalities of how to get in or out.

Creative director Consuelo Castiglione played with proportions. Cargo pockets billowed like balloons over jumpsuits and coats. Sleeves were oversized, ending in bell shapes or big open cuffs. On skirts, the arched hemline of previous seasons was revisited. Seen from behind, a peplum layered evenly with a jacket hemline and skirt for a sculptural effect.

For evening, a black dress was constructed out of panels stitched together loosely to allow skin to peek through, creating the effect of an ultra-modernist wedding cake.

Colours are mostly basics, from white to beige, to black, with flashes of emerald green, dusty pink and hues of blue. Marni prints for the season include florals and gentle geometrics. Big baubles and pointy shoes finish the looks.

After Milan, it’s the turn of Paris to present the new collections.