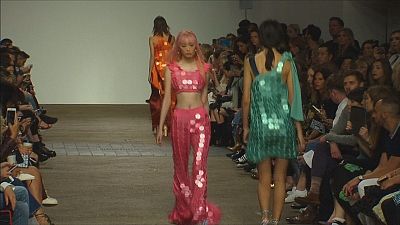 Backstage at the Julien Macdonald fashion show in London, the Welsh designer said he was thinking “glamour, sexy, rock and roll.”

And the catwalk was glamourous and sexy indeed, with uber-tight cutaway dresses and hot pants leaving plenty of tan and oily skin on display.

Military-style jackets were left mostly unbuttoned – with no blouse, of course. And models wore only the sheerest of bodysuits underneath for a trendy “no underwear” look.

There was more of a back-to-school feel at Mulberry, with traditional school-uniform shades of navy, mustard and burgundy.

Retro and fun for House of Holland

House of Holland celebrated its 10th anniversary with a throwback to the Sixties.

There were lots of gingham, floral prints and bright colours to stare at, and frills, flares and ruffles galore.

Designer Henry Holland said his collection was clearly a reference to the gypsy traveler communities.

The rewind went even further in Mary Katrantzou’s collection, packed with ancient Greek references with a psychedelic twist.