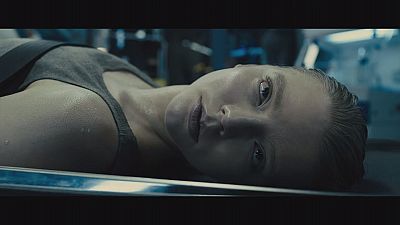 In Morgan, by 20th Century Fox, we encounter a humanoid created in a lab by a group of scientists.

The central character is played by Argentine-Brit actress Anya Taylor-Joy and is the directorial debut of Luke Scott, son of acclaimed Alien and Blade Runner director Ridley Scott, who produced the film.

In preparation for the film Luke Scott spoke with a number of scientists and admitted he has always been fascinated with the notion of synthetic life.

Luke Scott explained: “This idea of human beings becoming the creator of themselves I think is a fascinating thing. We are trying to fly close to the sun, we are trying to surpass the idea – this abstract idea of God, about becoming a Creator, and I think what’s really fascinating about that is we potentially hold in our hands our own destruction because of it.”

In the film, a character played by Paul Giamatti questions Morgan during a very intense interrogation session.

Since the scene featured only Taylor-Joy and Giamatti, the rest of the cast was able to sit back and enjoy.

Actor Kate Mara spoke about being part of that audience: “For them, it just seemed like the most exhausting two days of shooting ever because they did it in one take – the 11 pages – and there are so many different emotions. But we were all behind the glass just watching it happen as if it was a play and it was amazing to watch.”

Anya Taylor-Joy reflected on working with Giamatti: “It was unbelievable and also I think this was my second movie and you’re sitting across from such a veteran that just knows so much, he is such a master. He taught me so much in those two days. It kind of felt like going to acting school. He really taught me the importance of surprising the actor that you’re working with, which is something I have taken onto other jobs.”

Morgan was shot in Northern Ireland last year with a budget of around $8 million.

So far the sci-fi thriller has had mixed reviews.

One critic has called the character “the tween Hannibal Lecter meets Jason Bourne.”