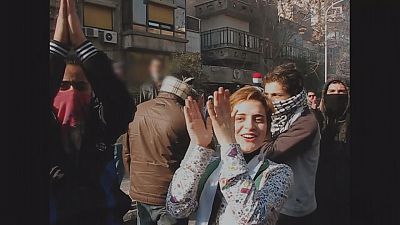 Screened at the Venice film festival, ‘The War Show’ is a documentary on the Syrian conflict told from the highly personal standpoint of a former radio DJ.

What documentary can offer is depth into understanding the conflicts on a human level much stronger.

It’s a compilation of videos shot by Obaidah Zytoon and her artist and activist friends between 2011 and 2013. After leaving Syria in 2013, Zytoon teamed up with Danish filmmaker Andreas Dalsgaard, who helped piece together a documentary from the 300 hours of footage.

“For me, what documentary can offer is depth into understanding the conflicts on a human level much stronger, that’s number one,” explains Dalsgaard. “And then I think that we also – how can I describe it? – today we need to consider very carefully if we can really live with the situation where the Assad regime, with the kinds of crimes they’ve committed, can stay in power for the future.”

As well as protests, tragedy and conflict, ‘The War Show’ also shows the circle of friends in their day-to-day lives, chatting, laughing, singing and smoking marijuana together.

In a media world saturated with 24-hour news coverage, Dalsgaard’s doc aims at giving the victims a face.

“It’s very important to understand what the people sitting in a dinghy crossing the Mediterranean, what this person is fleeing from,” he says. “What life does this person have? What kind of person are we talking about? And what was wonderful for me, seeing the footage for the first time, was to see that there was a group of friends that were totally like my own friends.”

With ongoing narration by Zytoon, the documentary examines the role of the camera in conflict and how it is used by both sides. It also addresses the rifts between various rebel factions, the rise of radical movements and the way children are affected by war.

Αfter Venice, ‘The War Show’ will be shown at festivals in Toronto and London.