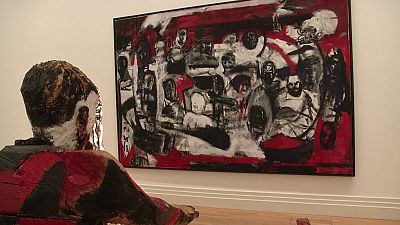 An exhibition currently on show in Berlin takes us back to the time of the Berlin Wall. Under constant state surveillance and censorship, resistance took on many forms. Voices of Dissent: Art in the GDR 1976-1989 showcases the varied and nuanced ways artists opposed the Communist State.

Hans-Hendrik Grimmling is one such dissident artist included in the exhibit at Berlin’s Martin-Gropius-Bau Museum. He came to the attention of the stasi after participating in several artistic interventions and refusing to conform to state norms for art.
Behind him his painting “Die Umerziehung der Vögel” – “The Reeducation of the Birds”, 1977 hung as he explained:

“I was not allowed to travel, not even in the Eastern block. My exhibitions were closed down. The seal around me was getting very close, very tangible. The flow of information stopped. The feeling of tightness was getting very pressing and schizophrenic. It was like an infection in us all.”

The exhibition starts in 1976, the year folk singer Wolf Biermann was expatriated from the GDR sparking a movement of discontent amongst artists and intellectuals.

A counterculture emerged. Dissidence and non-conformity took on a great variety of artistic forms in the former socialist republic.

Life and Art behind the wall

Behind the wall most parts of a citizens’ life were controlled by the state – and art was no exception. Artists were shoehorned to aesthetically fit the ideology of the communist sate.

Many artists made a decent living by conforming, others remained apolitical but some challenged censorship and the regime’s grasp on their lives.

“Of course, many of the artists just painted still life pictures and landscapes and stayed out of politics. But on the other side, there were the subcultural artists who used very clear language, either against the aesthetic norms of the artists union, with art that used crazy forms and expressive touches or by using realism and depicting themes that were considered taboo.”

Many dissident artists were jailed, others were confined to their home towns and most were under constant surveillance.
Twenty years since reunification, this exhibition goes beyond the tired East/West comparisons to see who the real heroes of the era were and how their courage is manifested in their art.