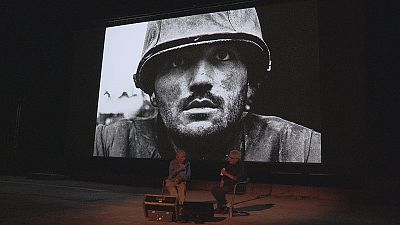 In early July, the town of Arles in the south of France is transformed into a giant photo lab. All the biggest names are found in the so-called Rencontres annual festival.

This year, a special place is reserved for Don McCullin, who is known for his war photography from the late 20th centurty.

Sam Stourdzé, the Artistic Director of «Arle Rencontres»:https://www.rencontres-arles told reporters: “Photography narrates the world through different voices. We stroll from one subject to another.”

“Our visitors stroll through about twenty different locations dotted across the city. We are here in the Church of St. Anne, which has been loaned to us this summer for an exhibition of the great Don McCullin’s work. He is one of the 20th century’s most significant war photographers.

“What makes this exhibition unusual is that it shows everything but war. The war is actually on the windows and through the pages of magazines. And on the walls we have around one hundred photos that show the work before and after and above all, that with Don McCullin the notion of conflict is ever-present. “

In the streets, the camera is a badge of recognition with more than 13,000 accredited professionals present. Spectators are invited to exhibitions featuring 3500 photographs and the atmosphere is informal.

It’s possible to come across street conferences like Seamus Murphy’s who has worked with the singer PJ Harvey.

This collaboration, presented in Arles in the form of an exhibition entitled The Hollow of the Hand will soon give rise to a documentary.

Seamus Murphy explained: “I met musician PJ Harvey, she’d seen my work from Afghanistan, liked it and she wanted to take some photographs actually for the album that she was doing “Let England Shake” so we got together and we did this project, made some film for her for her last album. We decided this time, we actually started working together from the beginning. So we collaborated on this project.”

The photographer and singer traveled together in Afghanistan, Washington DC and Kosovo.

Seamus Murphy went on to say: “Kosovo, I’ve been there in the late 90’s during the war and I had shown Polly (PJ Harvey= some of the pictures when she originally got in touch with me. And she was very interested in the pictures, she had been very interested in Kosovo when there was the crisis and she followed that, when the refugee’s situation was happening. We really wanted to go there.”

We came across PJ Harvey at a Roman Theatre where The “Rencontres” organises screenings. That night, in front of 2,000 people, the singer read her poems along with Seamus Murphy’s images.

Pj Harvey/ The Hollow of the Hand pic.twitter.com/ROeY0g90Ly

The second part of the evening was devoted to Don McCullin. The photographer, who has turned 80, covered conflicts and crises from Berlin to Vietnam, passing through Biafra and the homeless.

Don McCullin, le photographe des ténèbres. A homeless man lying by the embers of a fire in Spitalfields market, 1969 pic.twitter.com/QLMd7kufSC

He also underlined the importance of the exhibition and of festivals like Arles for showing his photos in the absence of interest from mainstream media.

Don McCullin explained in a dimly lit theatre: “That’s the only place, (where the photos can be seen) the newspapers, they don’t want this kind of thing anymore. They are looking for a kind of upbeat lives. They want to make money. They want to show the good looking people, the film stars, the rich guys, the footballers.

“They don’t want this stuff. They don’t want people dying of Aids. They think they have cleaned their act up a bit. They are doing us an enormous disservice. They are censoring the truth of life. They are burying the tragedies in the sands so we can’t see them.”

The Rencontres d’arles exhibitions will be on show until 25 September.