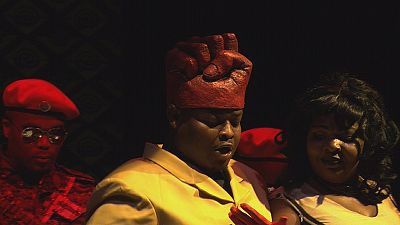 A remarkable take on Verdi’s Macbeth has opened at the Athens Festival. An adaptation by the director Brett Bailey and the South African theatre company Third World Bunfight, the show premiered in Cape Town in 2014 and Athens is the 31st city to host this amazing performance, praised by critics and public alike.

Macbeth tells the story of a man who becomes a tyrant in his country and for power, ambition, greed, he doesn't mind.

Macbeth is, in this inspired take, a bloodthirsty warlord in the modern day Democratic Republic of Congo (DRC). For the director, Macbeth in contemporary Congo sends a strong political message.

“Macbeth tells the story of a man who becomes a tyrant in his country and for power, ambition, greed, he doesn’t mind,” says Brett Bailey. “He kills anybody. For me there is a little of echoing on the Congo as well, where opportunism, self interest are what dominate. Tens of milllions of people are dying and that’s why I want to make this connection.”

The region has been blighted by war for 20 years, starting with the genocide in Rwanda. Some six million people have lost their lives, the greatest number to die in conflict since World War 2. The role of the West has been central, says Bailey.

“This conflict is driven by multinational corporations who are entering the region to get access to these minerals. We are depending on these minerals in these region for our digital media, our cameras, our cell phones, our laptop computers. So we are somehow complicit in what is going on over there.”

Verdi’s score has been rewritten and adapted for 12 on-stage musicians by Belgian composer, Fabrizio Cassol. The work is performed by a tight ensemble of 10 South African opera singers, and the renowned trans-Balkan No Borders Orchestra conducted by Serbian conductor, Premil Petrovic

South African Owen Metsileng, 28, who plays the role of Commander Macbeth, explained: “For me, as Owen, Macbeth is demanding, because of the age that I have and the experience. It needs someone who is very much ‘hot’, because it demands a lot, emotionally and vocally.”

At the centre of all Bailey’s performances is the uneven relationship between Africa and the West and the exploitation of a continent.

“First of all, I am South African. So I grew up under the regime of Apartheid for the first 25 years of my life,” he says. “This has really affected who I am. I am interested in the racial relations inside of Africa and outside of Africa, but also the colonial and post-colonial and neo-colonial relationships between Africa and the West. It is very definite in ‘Exhibit B’ (his previous exhibit-performance), in ‘Macbeth’ and in my next work, which is about the refugee crisis, going on in the Middle East, North Africa and Europe. It is really about this, as well. This is really the thread that runs through my work.

This summer ‘Macbeth’ is moving on from Marseille and Naples to Connecticut and Philadelphia.