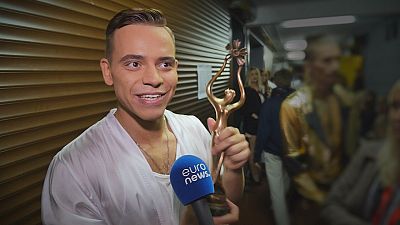 Have you ever heard a Mexican sing in Russian? Well, this is what it sounds like. Or does it sound familiar to you when an Italian sings in Ukrainian?

At the “Slavianski Bazaar” festival in the Belarusian city of Vitebsk, performances such as these have been part of the show for 25 years.

Italy’s Eleonora Vecchio explains the difficulty of singing in a Slavic language: “They have sounds that we in Italy do not have. I spent a long time with the speakers on in the studio listening to it, I rewrote and rewrote the lyrics to see how I should pronounce them. That was quite a challenge.”

Jorge Romano from Mexico, professes his love for the city: “I am very happy to be here, the Belarusian people are incredible, I loved Minsk, Vitebsk is beautiful, so I am very happy.”

Singers who want to take part in the festival are obliged to sing one song in a Slavic language – difficult for some, less so for others, such as Israel’s, Moldova-born Anna Timofey: “The atmosphere is great. Everybody is friendly and people smile at one another, we talk and share our experiences.”

“Slavianski Bazaar” is not just about the song contest – there is a large number of theatre performances and film screenings around the city.

Festival Director Aleksander Petrovitch Sidorenko says the city takes on another form with the huge influx of people.

“The city changes its aspect a lot during the festival. During the event and the festival’s activities we have around 150,000 visitors.”

Vitebsk, was once called the “Russian Toledo” for its picturesque churches and synagogues. It’s also the birthplace of world famous painter Marc Chagall.

Ahead of the final verdict by the song contest’s jury, its president hits the stage. Russian star Valery Leontiev, whose career peaked in the 80s, plays to a sell-out crowd …… while backstage the nervous contestants do what they do best: they sing.

The main award, the Grand Prix, this year was won by the local hero. Alexey Gross, from Belarus, became the fifth singer from his country to win the contest. The last time the host nation won was in 2001.

Gross left nobody in doubt as to what was next on his agenda: “Tonight me and my team are going to party. We will celebrate this award and drink to it.”

Belarus’s Alexander Rybak paid homage to his country of birth, despite the fact that he won the Eurovision Song Contest in 2009 for Norway.

“They are growing. They are getting more international and I think Belarus is way ahead of all the Eastern European countries. They are showing that they are ready for international.”

Out of the four former Belarusian winners, three have gone on to represent their country at the Eurovision Song Contest, Gross now hopes to do the same.

“Imagine a kind of Eurovision Song Contest but replace English as official language with Russian. And then think of a competition where not only Australia can participate, but countries from all over the world. This is, more or less, how “Slavianski Bazar” has developed over the past 25 years into a surprisingly diverse event, in a lively city at the Russian border well worth a visit.”

Sebastian Saam, for Euronews, from Vitebsk