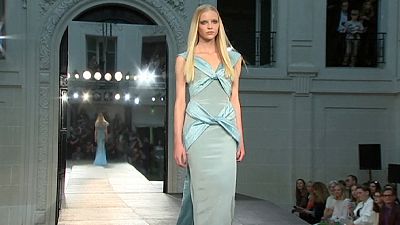 Other dresses had cut-out features as well as plenty of pleats for the evening. Adding to the luxurious feel were crystals adorning evening coats and twisted satin drapes on gowns, fit for a celebrity red carpet.

Attending as a Chanel brand ambassador, Will Smith’s daughter Willow dazzled on the red carpet, wearing a zip-front tunic belted at the waist with oversize pockets from designer Karl Lagerfeld., who turned his catwalk into a designer’s workshop.

The production saw Chanel return to the values on which it was founded, drawing attention to the detail and skill that goes into each piece

Alexis Mabille brought his own fairytale touch as he unveiled his collection with the theme “Pastel Vibrations.”

The French designer, who stuck to sculptural shapes, countered with intricate surface effects, later explained that the idea of his collection was to be in the pure tradition of couture while modernising it with a cool attitude.