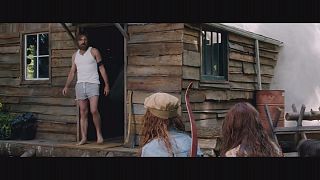 “Captain Fantastic” was, in the 1970s, a persona used by Elton John on a successful album, but now it is a completely unrelated movie starring Viggo Mortensen.

There were six kids in every scene. There's two musical numbers, two stunts, both of which involve children, we're a road movie so we're in different locations every single day.

He plays a dropout former college professor raisng his six children in a yurt in the forested American Pacific Northwest. They hunt, they fish, they study, learn languages, martial arts
and politics under dad’s wing.

It is Matt Ross’s second outing as writer and director, after a lukewarm response to his first. Ross has serious acting chops, and has been heartened by the critical response to
Captain Fantastic.

“The particular logistical challenges in this movie were that there were six kids in every scene. There’s two musical numbers, two stunts, both of which involve children, we’re a road movie so we’re in different locations every single day and as you said it’s two states. So it’s a big endeavour,” he said.

When tragedy strikes the family has to leave paradise and return to the city. It is only then that dad realises that while he may have prepared his children as human beings, he has not prepared them for life. Mortensen says parenting is the hardest, and best job in the world.

Ross won the prestigious ‘Certain Regard’ directing prize at Cannes for “Captain Fantastic”, and initial audience reactions indicate a warm reception for the film’s brew of hippy philosophy and humanism. It might just be the perfect summer movie. Check it out when it comes to a screen near you.