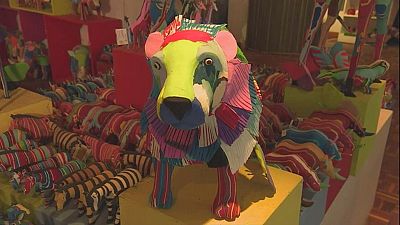 These funky animal sculptures are made of recycled flip-flops – not the tired ones you still have in your closet, but those the tide brings in every single day at Watamu Bay in Kenya, along with tonnes and tonnes of other plastic rubbish.

Locals say they pick up the trash that washes up onto the shores to try to keep the water clean, and because the fish they consume ingest the plastic, too.

A lot of the plastic is recycled locally, but the flip-flops are sent to the capital, Nairobi. There, a recycling initiative aims to give a new life to 400,000 of these discarded flip-flops each year: they become hand crafted figurines, which are sold to tourists but are much more than just decorations.

“I’m using this as a tool to communicate: healthy oceans, to communicate: the ocean is not the world’s dump yard. And to find ways to connect people to the ocean, because we are a blue planet, but most people forget that,” says Julie Church, founder of “Ocean Sole.”

This project provides work to about 100 Kenyans. Many of them used to carve wood, but that’s gotten more and more expensive, so this new kind of work helps them feed their families.

The colourful flip-flop animals are sold across Kenya but also in the US, Britain and Germany, with part of the profits going toward ocean conservation projects.

The idea has even caught on with local entrepreneurs, who sell their creations directly on the beach – right where the old flip-flops wash up in the first place.