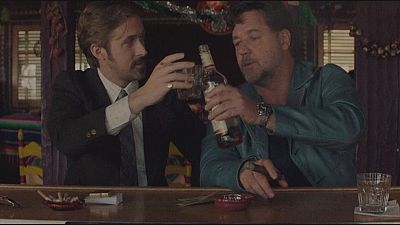 Russell Crowe and Ryan Gosling are ‘The Nice Guys’.

Underneath all the absurdity and the things that go on there's still a very good detective tale to be told.

After premiering in Cannes, the film opened in London’s West End to critical acclaim with reviews describing it as an intoxicating comic noir.

“It’s a very dense story,” said Crowe. “I mean, underneath all the absurdity and the things that go on there’s still a very good detective tale to be told.”

Pairing Gosling and Crowe was a stroke of genius according to critics, who say the comedy shows Gosling as You’ve Never Seen Him Before

“It was great fun this film,” he said. “I grew up on Shane Black movies so it was like a coming home movie, a coming home moment, to read his dialogue and get to be in one of his films.”

“It’s just this corrupted, sort of modern day Sodom and Gomorrah place, and you have these two Biblical guys, these knights in tarnished armour who have to step up and somehow navigate this landscape. I thought it’s a detective movie, it’s a fairytale. That’s fun for me,” said Black.