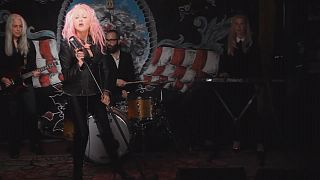 Pop singer, songwriter and Broadway musical composer Cyndi Lauper has been to
Nashville to record “Detour,” a covers album that shows off the singer’s unique voice in the most American of idioms, Country.

The premise is pretty simple: put the pop icon in a room with world class musicians and give her classic material to sing.

Her material goes as far back as the ’40s, when country was heavily influenced by early rock n’ roll and blues, and the songs are impeccably chosen, with numbers made famous by Patsy Cline, Loretta Lynn, Wanda Jackson, George Jones, Dolly Parton or Marty Robbins.

“The material had stories. And I just wanted to choose the stories that I could best tell with my voice. And some of them I just chose because I loved the songs and I didn’t know how the heck I was going to sing them. There’s a couple of them that were not happening. But the ones that happened had a magical tale.”

Early on in her career, Lauper was in a rockabilly band, and her career has embraced nearly every musical form, while taking in theatre , television, movies, wrestling and activism along the way.

Now 62, the pink-haired performer will be taking the set live on tour, and yes, she will be playing her classic pop hits as well.

“I am definitely going to sing these songs. And I have an idea of how I am going to put a little country in all of some of the songs I will be singing. Which I am excited about. You know, why not? What the heck. You live once.”

“Detour” includes collaborations with Vince Gill, Alison Krauss and Emmylou Harris and is in the shops now. Lauper kicks off a 19-city tour this week in Nashville, where else?