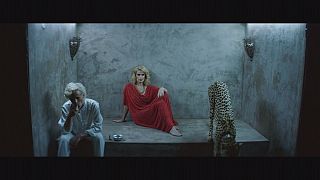 The important thing for me with this album is that I wasn't going to rush it out and that's why it's taken a little bit of time to make.

While it’s every artist’s dream, striking it lucky first time can be tough. Odell opened up about the album’s title.

“It’s about feeling isolated and temptation, and hints on finding some place to belong and it not feeling right. And it’s just being young,” he said.

Songs from the new album and music videos for singles ‘Wrong Crowd’ and ‘Magnetised’ were recently previewed to a few dozen select fans ahead of the official release.

Odell’s sophomore album has been nearly three years in the making – with the singer admitting he could not rush the writing process.

“Writing songs is weird. Your muse is very sensitive to outside things. So it can be difficult. The important thing for me with this album is that I wasn’t going to rush it out and that’s why it’s taken a little bit of time to make because I didn’t want to just sit at a piano and wait or force out a second album for the sake of writing a second album. I wanted to feel inspired. So I read a lot and watched a lot of films before I started really getting into it,” Odell explained.

Tom Odell won the BRITs Critics’ Choice Award in early 2013, an industry endorsement that has brought a string of mainstream successes including Adele, Jesse J and Sam Smith.

The 25-year-old singer-songwriter is currently touring Europe and the US. His new album ‘Wrong Crowd’ will be out on June 10.