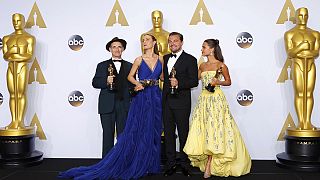 Kicking off the 88th Academy awards, host Chris Rock addressed the controversy over the lack of diversity that dominated the run-up to the event.

Making 'The Revenant' was about man's relationship to the natural world, a world we collectively felt in 2015 as the hottest year in recorded history. Our production needed to move to the southern tip of this planet just to be able to find snow. Climate change is real. It's happening right now

“I’m here at the Academy Awards, otherwise known as the White People’s Choice Awards! Do you realise, if they nominated hosts, I wouldn’t even get this job!,” he joked.

To many, the biggest surprise of the night was Best Picture winner ‘Spotlight’ by Tom McCarthy, which won over hot favourite, ‘The Revenant’.

“This film gave a voice to survivors and this Oscar amplifies that voice, which we hope can become a choir that will resonate all the way to the Vatican,” said ‘Spotlight’ producer Michael Sugar.

The film follows The Boston Globe’s tenacious Spotlight team of investigative reporters as they delve into allegations of widespread child sex abuse by Catholic priests in the Boston area and its cover-up at the highest level.

As expected, Leonardo DiCaprio finally earned his first Oscar for Best Actor for his portrayal as hunter Hugh Glass in ‘The Revenant’. The actor used his acceptance speech to urge action on climate change: “Making ‘The Revenant’ was about man’s relationship to the natural world, a world that we collectively felt in 2015 as the hottest year in recorded history. Our production needed to move to the southern tip of this planet just to be able to find snow. Climate change is real. It is happening right now,” he said.

It was Di Caprio’s fifth nomination for Best Actor in a career spanning 25 years. He was the clear favourite to take home the award this year for his gruelling portrayal of a fur trapper left for dead in the icy wilderness after being mauled by a bear.

The frontrunner for the top acting nod after winning at the Golden Globes, the BAFTAs, the Spirit and Screen Actors Guild Awards, Brie Larson nabbed Best Actress for her portrayal of an abducted woman in ‘Room’.

“I’d like to thank our director, Lenny Abrahamson, who is absolutely incredible, Emma Donoghue, who created this world, Jacob Tremblay, my partner through this in every way possible,” she said in her speech.

Based on the book of the same name by Irish-Canadian author Emma Donoghue, ‘Room’ echoes the story of real-life kidnapping victims like Austria’s Natascha Kampusch, who was held hostage for eight years.

Another of the evening’s surprise wins was Mark Rylance, who won over big favourite Sylvester Stallone, in the Best Supporting Actor category for his portrayal of a Soviet agent in ‘Bridge of Spies’. The film tells the true story of an American lawyer who finds himself thrust into the heart of the Cold War when the CIA sends him on a mission to negotiate the release of a captured pilot.

Best Supporting Actress went to Alicia Vikander for her portrayal of an artist whose husband becomes one of the first to undergo a sex change operation in ‘The Danish Girl’. At 27, Vikander was the youngest nominee in the category, beating far more experienced actresses like Kate Winslet and Rachel McAdams.

As predicted, ‘Mad Max: Fury Road’ swept the board in the technical categories, picking up a leading six Oscars for Sound Editing and Sound Mixing, Editing, Costumes, Makeup and Hair, and Production Design.

Best Foreign Language Film went to Holocaust movie ‘Son of Saul’ from Hungary. Hungarian-French director László Nemes’ first full-length film, it was a frontrunner after winning the second-highest prize at the Cannes Film Festival and a Golden Globe.

And 87-year old Italian composer Ennio Morricone, famous for his spaghetti western scores, finally won his Oscar for Achievement in Music for Quentin Tarantino’s ‘The Hateful Eight’ – a victory that brought the audience to its feet.

As the ceremony came to a close, euronews’ Lise Pedersen talked to Brandi Hitt from ABC News.

Lise Pedersen, euronews: “Hi Brandi, thank you for joining us from the Dolby Theatre in Los Angeles. So, finally a Best Actor win for Leonardo di Caprio… what a relief!”

Brandi Hitt, ABC News: “That’s right, Lise, a lot of celebrating going on here right now and many very excited that this has finally been Leonardo di Caprio’s year. He’s had five acting nominations, one producing nomination, going right back to the mid-1990s when he was nominated for ‘What’s Eating Gilbert Grape’. Tonight, it’s finally happened for Leo. He got a standing ovation and gave a very long acceptance speech, where he actually had a bit of activism, he wanted to put a message out there about global warming. But tonight he is out among the winners celebrating, and I have a feeling he’s going to be out partying with the rest of these folks for quite a long time this evening.”

euronews: “The ceremony ended with a surprise win for Tom McCarthy’s ‘Spotlight’ in the Best Picture category. Tell us more Brandi?”

Brandi Hitt, ABC: “Most critics believed that Best Picture was going to be between three films: ‘Spotlight’, ‘The Big Short’ and ‘The Revenant’. ‘The Revenant’, though, was the big favourite, because it was this beautifully shot film, of course starring Leonardo di Caprio. The director won an Oscar for Best Director as well, but in the end, ‘Spotlight’ came out on top. ‘Spotlight’ had also won the Screen Actors Guild Award for best ensemble, so it wasn’t a huge surprise, but still it did surprise some of the critics out there. One of the biggest moments of the evening was seeing Michael Keaton, one of the actors, run on stage, so excited – as you may recall last year he was also one of the actors in the Best Picture, ‘Birdman’, so this is two years where Michael Keaton has been starring in what turned out to be one of the Oscar winners for Best Picture.”

euronews: “So there were some surprises but also many expected wins, including Brie Larson’s gong for Best Actress in ‘Room’?”

Brandi Hitt, ABC: “That is true, I mean her performance was just stellar, it brought me to tears, it would probably bring any mother to tears watching that movie about her and her son stuck in this room until she decides to finally make a break for it after being kidnapped. And her acceptance speech was just down-to-earth, she looked stunning in that bright blue dress. But she was also an Oscar favourite because throughout the awards season she had just been collecting win after win, at the Screen Actors Guild, the Golden Globes, so it really wasn’t a surprise and definitely well deserved.”

euronews: “As expected, too, ‘Mad Max: Fury Road’ swept the board in the technical categories, smashing the Australian record of three Oscars for ‘The Piano’ in 1993.”

Brandi Hitt, ABC: “What a night for ‘Mad Max: Fury Road’! We’re talking Best Hair and Make-up, Best Sound Editing, Best Film Editing, Production… it just kept winning award after award throughout the night, and there’s a lot of celebrating going on here with the Aussies. We keep seeing them walk by here, one after one, and going to the Oscars after-parties and the Governors Ball. The Aussies are definitely having a good time tonight, a big night for ‘Mad Max: Fury Road’.”

euronews: “Brandi, sadly our time is up. Thank you very much for joining us from the Dolby Theatre in Los Angeles. That was ABC News’ Brandi Hitt giving us the full low-down on the Oscars.”