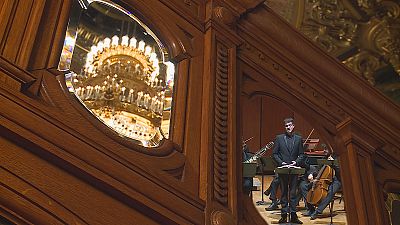 On a recent brief tour, internationally-renowned countertenor Philippe Jaroussky performed Handel’s masterpiece at the Monte Carlo Opera House under the baton of Ottavio Dantone and his orchestra.

I would like to go out for a drink with Handel and ask him for singing lessons.

A first-class cast, led by outstanding Latvian soprano Inga Kalna in the role of the sorceress, assured a memorable night at the opera.

“In some ways, my character, Ruggiero, embodies quite a few of a man’s shortcomings,” says Jaroussky. “He’s a charmer, a liar, and a bit of a coward with women. One could almost say he is rather obnoxious, but then, as the opera progresses, he changes, and – this is the beautiful part about Ruggiero – there’s an elegant and poetic dimension to him.”

“It is a character I have always wanted to play because it is not about constant vocal acrobatics. There is an element of purity and I’ve always felt at ease with certain arias in this role.”

“His musicality is a fact,” says conductor Ottavio Dantone. “On top of that, unlike most soloists who expect the orchestra to follow them, quite remarkably one can feel from his breath and the freedom of his singing that he wants to be “in” the music, part of the music. He thinks of music not only from the viewpoint of a soloist but as a singer who considers himself a part of a whole.”

“One of the main difficulties of being a singer is that one tends to imply intentions, or to be over-expressive, even before starting to sing, which should be done humbly, sticking to what’s written on the scores.

So I increasingly try to work that way, letting those notes and those words resonate in me, and trying to be more open, less rigid in my interpretation, and also leaving the audience free to feel as they choose.”

“If Handel knocked on my dressing-room door just before a concert, I think I’d be terribly scared to sing in front of him because it’s a well-known fact that he could be very angry with singers, and I’d be quite sad if he told me that he hates the way I sing his music.”

“On the other hand, he is also said to have been an excellent teacher, so I’d be thrilled to go out for a drink with him, and I’d very likely ask him for some singing lessons. With him at the harpsichord, I think it could be quite interesting!”