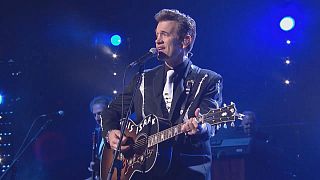 Chris Isaak has produced his first album of new material in six years with the release of ‘First Comes the Night.’==

The songs were recorded in Nashville, more than a country town according to the artist: "Nashville is a music town, it is not just country music, it is all kinds of music. I was in Nashville and every day I would get up for the free breakfast at the hotel and I would look over and there is Robert Plant. He would say, "Hey, Chris." I was like, you know, I'm doing good if I'm hanging with Robert Plant ! "

The City of Nashville pic.twitter.com/5HHM0ZC43e

Isaak takes the themes of love and loneliness and delivers them in his own particular style.

“I think there is an optimism that’s in my music that’s upbeat that I think is fun and I think it’s, like I said to somebody, you ought to be able to put on a record and use it after you broke up with your girlfriend or when you are trying to clean your house, it should have enough energy for both.”

Isaak is taking ‘First Comes the Night’ on the road with the same band that he has played with for the last three decades.

Performing is something he enjoys:
“I love seeing different ages at the show. I mean, when I look down at a show and I see somebody there who’s in their 80’s for sure I’m going to look at them and sing to them because I’m really happy and proud that I go, OK, they heard something in my music that they liked.”

Chris Isaak’s ‘First Comes the Night’ is out on Vanguard records.