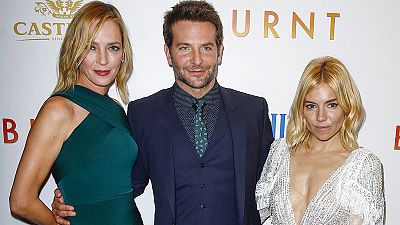 Bradley Cooper is back in a role far removed from the character he played in ‘American Sniper.’

This time Cooper is the Michelin starred chef Adam Jones in ‘Burnt’, he has fallen on hard times as a result of drug taking, womanising and arrogance.

He heads to London looking to redeem himself and his reputation.

Among the cast are the celebrated film actors Uma Thurman, Sienna Miller and Emma Thompson.

Bradley Cooper explains his motivation to take on the role: “I always loved cooking, and at 18 I was a prep cook in between high school and college in Somers Point, New Jersey at a seafood Italian restaurant. And I remember the chef was 21, he had just come back from France where he had studied and had all these ideas and was a little bit like Adam in that way.”

Sienna Miller immersed herself in her part: “I studied chefs. I watched services in many different kitchens, I interviewed different women and men who work in those kind of kitchens and watched how they moved and I really wanted to immerse myself in it which wasn’t hard because I love this. I love food, I love cooking, I love eating.”

A key ingredient in the film is the German actor Daniel Brühl who played Niki Lauda in the successful movie ‘Rush’: “I never played such a part before, so of course I was nervous and I felt like ‘Oh, Bradley, let’s see how it goes.’ Fortunately we had a couple of shooting days before that so I could tell that he is a lovely guy, is embracing everyone of us, he was very kind to me very generous.”

‘Burnt’ is ready for consumption, get it while it’s hot.