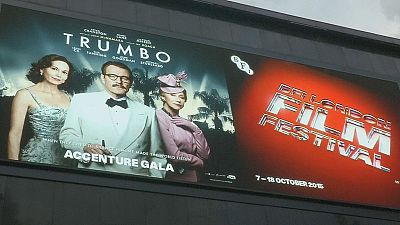 Trumbo is the true story of screenwriter James Dalton Trumbo, who, in the 1940s, was on the list of the ‘Hollywood Ten’, writers and directors cited in contempt of Congress for their alleged involvement with the US Communist Party.

In 1950, Trumbo served eleven months in prison and was later exiled to Mexico.

The movie had its European premiere at the BFI London Film Festival. Bryan Cranston, who plays the lead role, comments on the screenwriter and being blacklisted:

“I think you can think whatever you want. No one can control that and the interesting thing about Trumbo is that he was sent to prison for a year because of his political ideology. No crime was committed. And that’s wrong, in any civilised country.”

Actor John Goodman plays producer Frank King, who secretly employs Trumbo. He comments on the flamboyant writer, saying, “I knew his reputation. I knew what he did and I’ve certainly enjoyed his films over the years. What I admire about him is how prolific he was and how good he was and constantly cranking it out and the courage to stand up for his beliefs.”

Helen Mirren, who stars as gossip columnist Hedda Hopper, an enemy of Trumbo’s, jokes about what she’d be blacklisted for.

“Probably for swearing, I always seem to get into trouble for that, but, you know, general bad behaviour probably, I don’t know. I don’t behave badly on purpose, that’s always a misunderstanding, or a mistake.”

For years the writer was forced to work under a pseudonym. Trumbo was later credited for Exodus and Spartacus, with the help of actor Kirk Douglas.

Trumbo is currently screening at the BFI London Film Festival. The movie opens in North America in November and across Europe early next year.