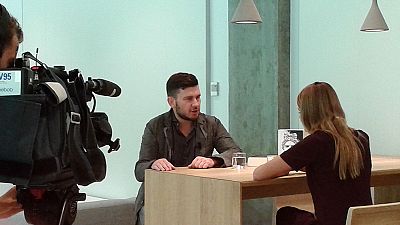 After the release of his book this week, Russian writer and former euronews journalist Dmitry Glukhovsky, known for his exploration of social and political structures, speaks to Euronews about his motherland and his mission to recruit readers to his ‘humanistic’ cause.

Science fiction could be considered a ‘safe haven’ in which one is able to expose society’s flaws, but can also avoid direct finger-pointing. You paint a gloomy picture, but it recognisable? Does it get people’s attention and scare them?

‘‘The picture is rather recognisable. Everybody who read the book ‘Futu.re’ told me that it is not about the future, but about the present. Even though the official theme is immortality.

In the times of the Soviet Union science fiction was the only method, the only ‘loudspeaker’, through which it was possible to talk about society’s problems or the political system and to criticise them both. While the so-called ‘real literature’ was totally controlled by the state.

No matter how popular my books are, 100,000 readers is nothing compared to 140,000,000 TV viewers that feel hatred, intolerance and contempt for other people or nations. All my efforts are fruitless. I’m fighting TV on my own. And actually I’m not even trying to fight it. My mission is just to find readers and recruit them to my rather humanistic club’‘.

‘‘In one of your articles you come to the conclusion that there is tendency to glorify Russia’s role in world events. It seems that Russians are more preoccupied with their neighbours and the rest of the world, rather than with what they have on their own plates. Do you think this is the case?’‘

‘‘We are always forced not to think about the quality of the food on our plates, low salaries, poor healthcare or lack of opportunities to travel, but about what is going on in Honduras or what America is doing in Latin America. It’s ok to reflect upon this kind of thing. And then the story repeats itself after a short while. We are back to the tradition of distracting people’s attention as a strategy

Apart from that, in the Soviet Union, sorry, I mean in Russia, there is a strong imperialistic complex. Russians used to be a part of a huge empire, the biggest country in the world, which we still are… We are facing the after effects of a war that we lost. War with Western civilisation, with the United States. And so there is a great need to restore this subjective feeling of superiority.’‘

‘‘The characters of your bestselling series ‘Metro’ are constantly wrestling between fear and courage. You explicitly say that your inspiration comes from Russian society. Under what conditions would you say courage triumphs over fear?’‘

‘‘We can’t say that Russians are cowards. Russians are brave, even desperately brave, I would say. But the problem is that their despair and courage are not always used for the right cause.

The biggest discovery I have made during last year and a half in observing what is happening in Russia, was the sudden need for an enemy. Both an internal enemy and an external one as well. We were offered an enemy. At first we clashed with our nearest neighbor. Now we are clashing with Western civilisation, which we are supposed to despise and distrust. Maybe soon we will be inspired to hate them, if necessary.”

Portugal election: the rise of the far-right

Portugal election: the voters caught between apathy and anger

Tokyo, home to more than sport at the Paralympic and Olympic games

"Maybe other countries wouldn’t have done it, but Tokyo did it.”