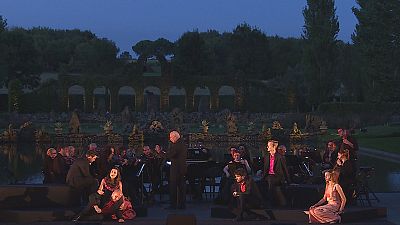 With Les Art Florissants we were part of one of the most important musical adventures at the end of the 20th century.

William Christie: “I’m a person who’s arrived here wanting to exploit, in a real sense European culture; you know, I’ve been in love with it for as long as I’ve been alive. So, this garden I’d say is a kind of a ‘révérence’, it’s a kind of a gesture, it’s a kind of a thank you to a very long education, which obviously is very eclectic, and diverse, and cosmopolitan: it’s French, Italian, English, American, and it gives me great pleasure.”

Together with his world famous ensemble, Les Arts Florissants, William Christie has invited young artists from his Academy as well as promising musicians from New York’s prestigious Julliard School to perform at the Festival – with his loyal deputy Paul Agnew, they perform at the “Promenades”, brief afternoon concerts taking place all over the gardens, another of Bill’s passions.

William Christie: “I learned very quickly when I was a youngster that I could count on music: it’s solace, it’s something that can comfort you, and I feel very much the same about gardens. I can walk around, and find rest, and then happiness, yes, and companionship because, you know, like music you’re never alone in a garden.

“We’ve been working now, the Arts Florissants, for thirty years, and I’m very happy, we’re very proud of what we have done, you know, we’ve given life to music that didn’t have life; also, we’ve contributed towards a new mentality for other epochs of music: how one looks at a score? how one deals with it? what is the honest approach? We were part of one of the most important musical adventures at the end of the 20th century.

“I find myself in that extraordinary moment of life where everything is starting to happen, I’m talking about my students, the beginnings of careers, the beginnings of, yes, fame, notoriety. And I feel when I’m with these people there’s no sense of age whatsoever, I don’t feel old like the patriarch or the person who’s done it all; you get very enthused, there’s an enormous energy level that they contribute. In other words, yes, mentally speaking, it’s a fantastic way to stay young.”

In the gardens of William Christie