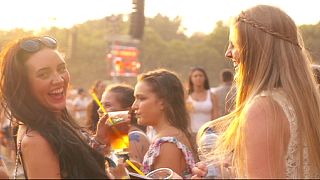 The 23rd Sziget Festival kicked off on Sunday in the Hungarian capital Budapest.

It's the Island of Freedom, you can do whatever you want. It's so fun

Since its birth in 1993 it has become one of the most popular multicultural events in Europe, attracting up to 400,000 fans from over 70 countries.

The festival is hosted on an island in the heart of the capital that has become known as the Island of Freedom.

Over 50 venues will host around 200 performances daily. Lily Allen, Queens of the Stone Age, Jake Bugg, The Kooks and The Prodigy are among the headlining acts.

But for many people it is about more than who is on the stage.

“It’s pretty much just camping out with people”, said one festival goer from Norway. “Meeting up every year, people traveling alone, meeting up at the festival camp and just having fun together.”

“It’s the Island of Freedom, you can do whatever you want. It’s so fun”, said another woman.

The festival runs for a week and organisers are hoping for a record-breaking attendance of 415,000 people.