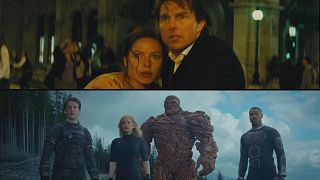 If you’re a big fan of action movies, packed full of stunts, then some of this summer’s releases are set to leave you salivating.

Arriving in cinemas from the end of July, “Rogue Nation” is the fifth instalment of the hit Mission: Impossible series.

The mission is to eradicate the Syndicate, a rogue organisation set on destroying the Impossible Missions Force.

This summer also sees the arrival of the “Fantastic Four,” which takes its name from the Marvel Comics superhero team.

It centres on four young people who find themselves in another universe. They have to work together to save Earth from a former friend, who’s now their enemy.

The “Fantastic Four” will also start showing in cinemas from the end of July. It’ll be on screens in the UK and Ireland on 6 August 2015.