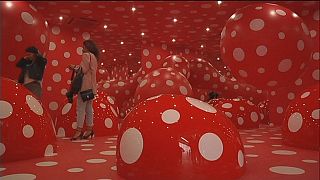 Her aim was to provide the first philanthropic institution in Russia to focus on contemporary art and culture, and it was first based in Bakhmetevsky Bus Garage.

The building, a well-known former restaurant, was transformed by Dutch architect Rem Koolhaas at a cost of around $27 million.

“It’s intending to show that in Russia, new things are possible, institutions can be built and that there is a cultural programme to embrace, in every sense, the contemporary condition,” explained the architect.

As yet it seems no exhibits from the football champions of England, Chelsea are on show. The club is owned by Dasha Zhukova’s husband, Roman Abramovich. The oligarch has an estimated private fortune of over $9 billion.

It’s understood he contributed in some way to the building of the museum, though the amount is a closely guarded secret.

“I think what’s really important for Moscow is that we have an art ecosystem that develops. We have many, many amazing people that work in Moscow, curators, artists, arts administrators. We have some incredible institutions. We have many developments that are happening, new museums that are opening,” said Kate Fowle, the Museum’s chief curator.

Since the Garage Museum of Contemporary Art was founded seven years ago, it has staged more than 700 exhibitions.

There have been 2,000 educational programmes and many books published.

The new building is now open to the public with a summer exhibition featuring the works of various international artists and the pioneering Russian artist Erik Bulatov.