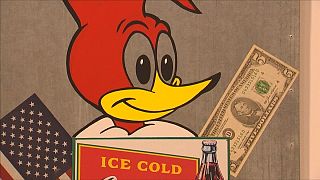 When it comes to art auctions, money talks – but at
Sotheby’s latest sale, which opened for preview on 8 June, it’s dollars that are the focus of the show.

...money is one of the prevailing themes of Warhol's work, and the relationship between art and commerce has become ever more important in today's art market...

A private collection of 21 works of art inspired by the US dollar was unveiled for the first time ahead of auctions in London on July 1 and 2.

The lot revolves largely around the work of legendary US pop artist Andy Warhol, whose fixation with money is well documented.

Says Sotheby’s James Sevier, “…money is one of the prevailing themes of Warhol’s work, and the relationship between art and commerce has become ever more important in today’s art market, but what’s interesting about this collection is you have behind me the only hand-painted dollar painting. It was the very first dollar painting he did, and then he moved on from the hand-painted to the silk screens, of which we are very lucky to have two in the collection.”

Each piece comes from the collection of one European owner, who is thought to have worked in financial services. It includes some of Warhol’s famous dollar sign series.

Adds Sevier, “The dollar is more than just an American currency, it’s a symbol of so many things – aspiration, wealth, glamour – and I think he was brilliant at pinpointing a trigger which everyone can draw to. Interestingly, he looked at the one – and two – dollar bills rather than the fifty or the one hundred, because it was about accessibility, like with the Campbell’s soup cans.”

Andy Warhol coined the now-famous expression “15 minutes of fame”. The highest price ever paid for a Warhol painting is $105m US (93 million euros) for a 1963 canvas.

Other works in the Sotheby’s sale include those by American artist and social activist Keith Haring, Germany’s Joseph Beuys, Tim Noble and Sue Webster, and Scott Campbell, a New York based modern artist.

The combined pieces of art carry an estimated value of £41m-£57m (57-78 million euros). The auction house hopes to attract museum interest as well as private collectors.