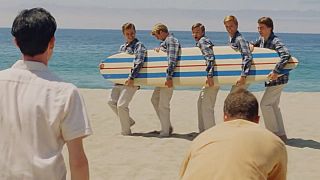 Love & Mercy is a biopic about Brian Wilson, the co-founder of the Beach Boys. He wrote many of the band’s hits and is acknowledged as one of the most innovative and creative forces in pop music.

But the film doesn’t shy away from dealing with Brian WIlson’s mental health issues.

The man himself was at the Los Angeles premiere, and admitted that he’d had doubts about the film: “Yes, I was very concerned and yes they did get it right.”

Brian Wilson as a young man was played by Pauk Dano, and as an older man by John Cusack.

John Cusack says listening to the music is a revelation: “When you get back into it and listen to it and try to imagine a time when those sounds where never there. Just think there was no orchestral stuff in rock and none of this stuff was here.”

Paul Dano agreed: “What it really came down to was the music. Not just listening to it but learning to play and sing it. When you physically play and sing the songs you feel like Brian is kind of with you. The music is definitely what brought me closest to him.”

The director, Bill Pohlad said that there was no problem having two actors play the same character: “We were not trying to make them look or act alike. We never had Paul or John get together to coordinate their performances. It was more letting them organically finding the spirit of Brian.”

The film doesn’t shy away from dealing with Brian WIlson’s mental health issues.

For more information about the film see IMDB

‘Love and Mercy’ – the trailer