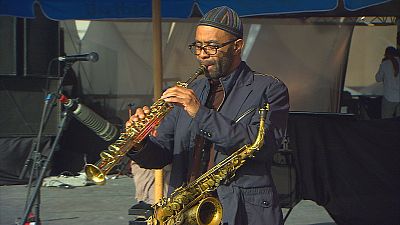 US saxophonist Kenny Garrett , considered to be one of the best jazz musicians of his generation, played at the Gnaoua Festival in Essouira,Morocco, where he presented a repertoire of his latest CDs.

“The latest disc is called ‘Pushing the World Away’,” he told Euronews. “It was Grammy Award nominated and we are also playing music from ‘Seeds from the Underground’, we are playing from both CDs and some other things we are throwing in.”

‘Seeds from the Underground’ won two Grammy nominations, and won the German Echo Award in the Saxophonist of the Year category.

Does he think his jazz style, which can sometimes be very elaborate and complex, is accessible to the Moroccan audience here in Essaouira?

“Well, music is music,” he said. “You know, there are some concepts which might take a little time to learn, but I think in general music is music and rhythm is rhythm. You just kind of have to learn them when you are playing that style.”

After his dates in Morocco, Kenny Garrett returns to New York to record a new album and in July he will be back in Europe playing various dates in France.