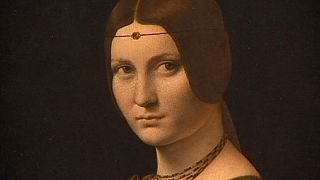 The Palazzo Reale in Milan is celebrating the archetypal Renaissance man Leonardo Da Vinci with the largest ever exhibition of his works organised in Italy.

The novelty of this exhibition is the constant comparison of Leonardo's work with that of his preceding sources, both artistic and scientific ones.

It includes over 200 artworks on loan from more than 100 museums around the world.

Painter, sculptor, inventor and draftsmen the collection offers a once in a lifetime overview of his body of work.

“We identified ten themes of his body of work, these ten themes span from his youth to his older age, and they show how each of them evolves,” exhibition curator Pietro C Marani explained. “One of them is about his drawing, which was the foundation of his art. But the novelty of this exhibition, is the constant comparison of Leonardo’s work with that of his preceding sources, both artistic and scientific ones, and with his contemporaries.”

The biggest most important expo in #LeonardoDaVinci on view now at the #PalazzoReale, Milan! http://t.co/RAR6NNBGxPpic.twitter.com/uKazP6nNS7

Among the masterpieces on display are the unfinished painting of St Jerome. The piece which rarely gets a public outing, is incidentally one of the most famous drawings in the world. The Vitruvian Man will be on display for one month only. Due to conservation rules pencil works receive few public displays.

“We received 30 drawings from the Queen of England’s collection,” said Marani. “She was very generous. Because we were confident that we had gained this first kernel of material, we proceeded to build the layout for the exhibition. The name of the exhibition is ‘Drawing the World,’ Leonardo’s goal to depict the world”.

Though most famous for his paintings, Da Vinci’s work as an engineer was way ahead of its time, designing a prototype for a helicopter, solar power and a calculator. This part of the exhibition may distract from the fact that his most famous work, the Mona Lisa, remains under lock and key at the Louvre in Paris.

Man enjoying a 360 degree virtual experience of Da Vinci's life at the end of the Leonardo exhibition in Milan pic.twitter.com/7TciEJikzx

Visitors hoping to catch a glimpse of the exhibition should head to Milan before it closes on July 19th.