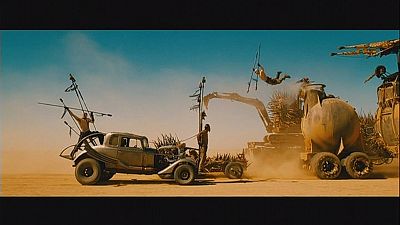 The latest instalment of the Mad Max franchise is noisily hitting cinema screens around the world at the moment and director George Miller, who created the dystopian world in the original 1979 movie that made a star of both him and Mel Gibson, has a much bigger budget.

“The nature of this beast was that it was to push the boundaries of what was possible with cars, with physical performance and story narrative combined together. So there’s very little dialogue in it and it’s a very simple tale in narrative, but there’s an abundance of extravagant stunts and car play which is happening in real time. So it was definitely, it asked a lot. It was very ambitious,” says Hardy.

According to Theron, filming the brutal, desolate post-apocalyptic thriller in the Namibian desert for a lengthy eight months was intense, to say the least.

Theron admitted that she and co-star Tom Hardy clashed at times, but thinks it has been sensationalized in the media.

Cast and crew will be hoping “Mad Max-Fury Road” will emulate the success of the earlier movies because, tough shoot or not, they would surely love to get on the road again. Will the audiences go along with the ride?