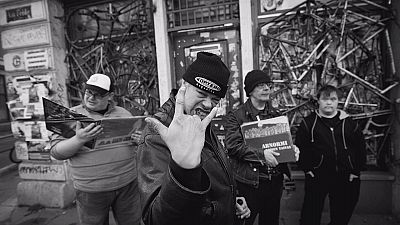 Kari, Pertti, Sami and Toni will be representing Finland at the upcoming Eurovision Song Contest in Vienna.

The quartet, whose members suffer from mental disabilities like Down’s Syndrome and Autism, say they entered the contest to raise awareness about people with disabilities.

The first punk band to compete for the top prize at Eurovision, they are confident their style will appeal to voters.

“Well, we think that our music will be well received, just like any other type of music,” says Sami, the band’s bass player.

“You can always give it a try,” adds singer Kari.

Founded in 2009, PKN – short for Pertti Kurikan Nimipäivät (Pertti Kurikka’s Name Day) – has released five EPs and one album. Already a household name at home, they have toured Scandinavia, Europe and North America.

The band’s rise is chronicled in an award-winning documentary, ‘The Punk Syndrome’, a story of rebellion against the mainstream by people with disabilities, available on Vimeo on Demand with subtitles in seven European languages

After an Israeli transgender diva and a bearded Austrian drag queen, these could be the latest artists to challenge prejudice at the Eurovision song contest. Finland has a history of breaking the Eurovision mould: the contest’s first heavy metal glam-rock monster band, Lordi, gave the country its only victory back in 2006 with ‘Hard Rock Hallelujah’.

In true punk style, band members will be offering no concessions to Eurovision norms of style, saying they will make no changes in how they look or what they wear for the contest.

And what viewers can most look forward to is making fun of those trying to pronounce the band’s full name on the night.

Rendez-vous on 23rd May in Vienna.