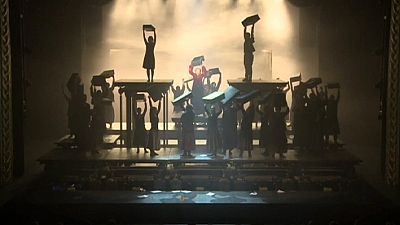 The two-week programme of the Madách International Theatre Meeting has brought together 20 productions from 13 countries in Budapest.

After the success of the first festival last year, even more theatres asked to join. It’s an important event for the artists and for Budapest, a country that can act as an ideal cultural bridge between western and eastern European theatres.

Andras Kozma is the curator and organiser of the Mitem Budapest.

“Hungarian theatre is not well known in the world,” he says. “As with other small nations our culture is hidden from the world, unfortunately. The importance of these countries’ cultures is much greater than the size of their population or territory. Foreign theatre companies can inspire each other, we may get very serious inspiration from others.”

The Macedonian National Theatre presented the play “The Eternal House”, the story of a house that has witnessed events throughout the centuries, a house of interwoven destinies, different worlds, a house with rooms full of stories. Among them the life of philologist, slavist, historian, and ethnographer Petkov Misirkov.

“He was a linguistic genius, who is said to have spoken in 26-27 languages,” says director Dejan Projkovski.

“Petkov Misirkov learned languages extremely quickly. He also studied at the Sanskrit department of the St. Petersbourg University. He set up the rules of the Macedonian language as a literary language. His talent was as sparkling as Mozart’s talent, and their fate was the same: to die young and poor.”

The performance by the Italian Piccolo Theatre was in such high demand that extra performances had to be arranged. ‘The Inner Voices’ (Le Voci di Dentro) starred Toni Servillo, who became famous around the world after his role in the Oscar-winning film, The Great Beauty (La grande bellezza). For the first time he was working with his brother Peppe, who plays an eccentric uncle who decides to communicate through the medium of fireworks.

Peppe Servillo said: “According to legend the writer Eduardo De Filippo was inspired by a real person, we do not know if it’s true. What he shows on stage is more real than life because he is a key character of the play, uncle Nicola has given up with the value of words, because he thinks words do not connect people and lost their credibility. So the character of uncle Nicola becomes the symbol of the condition of all people acting on the stage”

The Centre of Contemporary Art DAKH from Kiev presented “The Dog’s Cage” as a cry for Ukraine. The performance raises questions about the current conflict. Ukrainian director Vladyslav Troitskyi says he felt tension between Ukrainian and Russian artists at a Paris event, earlier in April. Now in Budapest Russian and Ukranian companies also perform.

“The first part of the performance is actually the dystopia of Ukraine. Former President Viktor Yanukovych came to power in 2010, when the performance was born. The feeling of hopelessness at the time is expressed by the dog’s cage.”

The Burgtheater from Vienna performed Chekhov’s Seagull (Die Möwe) – the production talks about life and the roles we take while living it. After the play the theatre group from Austria read a direct political message on the stage – actor Martin Reinke said that Hungary drifted through democratic elections, moving more and more away from the spirit of democracy and Europe.

Some of the audience applauded clapped, while others expressed their disapproval of the action.

The Hungarian National Theatre condemned it as unworthy and waits an explanation from the Burgtheater.