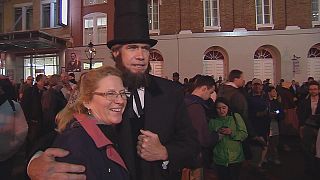 Commemorations have been taking place across the United States to mark the 150th anniversary of Abraham Lincoln’s assassination on April 14, 1865.

He is definitely someone to look to inspiration on leadership, on equality, integrity and justice for all.

He was the first American President to be killed in office and the hour by hour re-enaction of his last night spent at Washington’s Ford Theatre is an event eagerly followed and played by the actors’ taking part.

At 1021pm, during the performance of “Our American Cousin”, actor John Wilkes Booth, a pro-slavery fanatic, sneaks into the presidential box and shoots Lincoln in the head. Booth jumps onto the stage and flees, sparking pandemonium inside the theater.

“As word traveled, people began to gather outside the Ford’s Theatre here on 10th Street and hold vigil for President Abraham Lincoln. It was a very sad and terrible bit of news, obviously.”

By 11pm, the street outside the theater was packed.

People lit candles and prayed for the unconscious president who was taken to a house across the street. African-Americans fear a pro-southern conspiracy that aims at undoing the liberation of the slaves.

“He is definitely someone to look to inspiration on leadership, on equality, integrity and justice for all,” said Beyea.

Lincoln died early the next morning. He would be the last casualty of a civil war that cost some 750,000 American lives – more than all other American wars combined.

Our correspondent Stefan Grobe said: “President Lincoln is widely regarded as the saviour of the nation, the liberator of African-Americans and a great unifier across the partisan political divide. Many believe this is somebody that America needs today.”