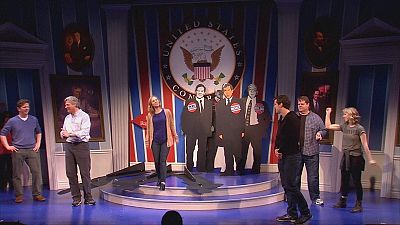 Everything you ever wanted to know about Bill Clinton and his extra-marital affairs… or did you?

‘Clinton The Musical’:http://clintonthemusical.com/, which has just premiered off Broadway, depicts how the Clintons attempted to save the presidency following his affair with former White House intern Monica Lewinsky in the late Nineties.

The show is the brainchild of Australian brothers Paul and Michael Hodge, who were inspired by a musical about their former Prime Minister Paul Keating.

After premiering at the Edinburgh Festival Fringe two years ago, the show has had a run in London and in New York, and comes just as Hillary Clinton is expected to announce her run for the White House.

“Since the New York Musical Theatre Festival, only two songs are the same in what was the first act, everything else has been rewritten. So there’s been a huge amount of change over that time. That’s just to do with both making the show better and there’s been a lot going on in politics in the past year so we’ve kind of tried to keep up with that,” says Paul Hodge.

The former US president’s character is so conflicted that he is portrayed not by one but two actors: the first a wholesome, intelligent Clinton and the other a randy, rogue character. Only Hillary can see both.

Besides Lewinsky and the Clintons, the musical also features former Republican Congressman Newt Gingrich and Kenneth Starr, the special prosecutor who issued a report on the scandal. Nobody is spared.

“I think we poke fun at everyone. I think that’s what comedy is, and it’s not with any kind of political purpose, it’s just looking at people as human being and human beings are funny so that’s what we’re aiming to do,” says Paul Hodge.

It remains to be seen whether the updated version is any different to the musical performed in New York last year, which was slammed as puerile by one critic and praised as a delicious political satire by another.