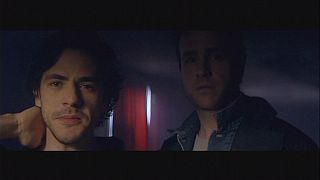 Singer-songwriter Jack Savoretti is back with his fourth album ‘Written in Scars’, featuring the lead single ‘The Other Side of Love’.

Four years ago, the Italian-English artist announced he had had enough of scratching a living as an independent artist and that he was quitting.

But then, something happened: he couldn’t stop writing, he says, and it was the best, most personal music he’d ever made. His latest single is about the darker side of love.

The London-based musician, who called on his friend actor Rafe Spall to star with his actress wife Jemma Powell in the video for ‘The Other Side of Love’, said it was bizarre watching the pair on screen.

He explains how he wrote this new album: “This album was different to all the other albums mainly because of the approach. The approach was completely different.

“I watched this Paul Simon documentary just before going in to sort of make this record and they were asking him, ‘How do you make your albums? Why are all your albums so different and yet sound so Paul Simon?’ and he answered that he starts every record from rhythm and he usually falls in love with a rhythm from a certain part of the world and then designs the record around that. And that kind of blew my mind because rhythm is usually the last thing that we put into the formula.

“Usually, for me, it’s always been about the songwriting, and when I say songwriting, there’s always rhythm involved with songwriting, but it’s not the rhythm per se as a production, or a sound, or a feel to the record. Usually the lyrics and the melody and the song itself was what came first to me,” says Savoretti.

The singer-songwritter will be performing a number of gigs in the coming months including in Italy and in the UK, including at Scotland’s major music festival ‘T in the Park’ in July.