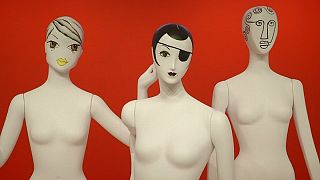 New York based mannequin designer Ralph Pucci’s unique approach to sculpting mannequins is being celebrated in an exhibition in the Big Apple.

Three decades of collaboration with the likes of supermodel Christy Turlington or fashion designer Diane von Furstenberg have resulted in the creation of innovative mannequins ranging from Chinese-inspired terra-cotta warrior figures to cartoonish dummies.

“He’s taken a design form that once was neutral, a little bit anonymous, something that you forgot about because you were looking at the clothes and he’s made that not only into a subject of interest in its own right but actually something that makes the clothes look better. And that’s the genius of Ralph Pucci,” said the museum’s director Glenn Adamson.

The exhibition includes over 30 mannequins, as well as a recreation of Pucci’s sculpture studio. His master sculptor and longtime collaborator, Michael Evert, is in residence throughout the event to give visitors a first-hand look at the creative process, from initial clay modeling to the fiberglass end-product.

“I think the execution is really, really well done. They’re fine-tuned mannequins. They’re sculpted beautifully by Michael Evert. The ideas are ahead of the curve and they’re timeless,” said Pucci at the exhibition.

‘The Art of the Mannequin’, featuring the work of designer and mannequin manufacturer Ralph Pucci. is on at the Museum of Arts and Design in New York until the end of August.