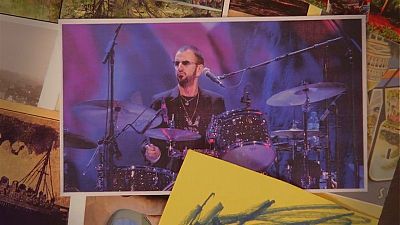 He may have famously told his fans to give him a break and stop sending fan mail a few years ago but former Beatle Ringo Starr is still making music. His new solo album with his All-Starr band members is a collection of songs reflecting on his life before and with the Beatles. The first single from it “Postcards From Paradise” is inspired by various Beatles songs.

“I had a sheet of words and I was trying to fit in this song “Mister Moonlight” which John Lennon did a long time ago and a great version too and it was a love song and it was a guy and a girl under Mr. Moonlight. I thought oh that’s great and then I sort of had ‘It Won’t Be Long,’ suddenly I’ve got three or four Beatles titles and I thought wow that is really cool. ‘Eight Days a Week’, you know what I mean.”

Ringo also has a new photo book project. In 2013, he put out a limited edition book combining photos from his archives along with writings about his life which sold out within weeks. Now the ‘Open Edition’ is out, a more accessible and affordable printing of the book

“I said well I’ve got this idea about all the stuff so why don’t we do a special edition, ‘Ringo: Photos.’ ‘Photographs: Ringo’ and he liked the idea so we put a whole thing together and they put it out as a special edition of two and a half thousand and it went like that. So then we decided well there is a lot of interest why don’t we just put out like a regular book now. I like to call it the cardboard book you know the regular back and that’s what’s coming out.”

It is a busy time. Sir Paul McCartney is due to induct Ringo into the Rock and Roll Hall of Fame in Cleveland, Ohio, on April 18 and Ringo tours America in October –