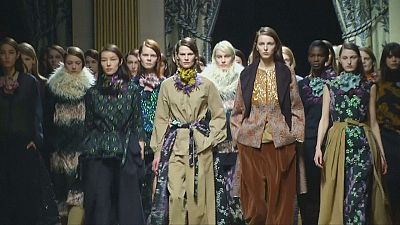 There were sumptuous fabrics and simple cottons on show from the Belgian designer who is known for his love of intricate textiles and he stages just two women’s wear shows a year because of the time required to develop them.

Bit he was anxious not to let the exotic run away with what was meant to be a “ready-to-wear” show in the French capital. It paired regal red and gold tunics worthy of Henry VIII with cotton cargo pants, huge deep purple skirts with sleeveless shirt dresses.

Van Noten said he had deliberately matched the voluminous with the fitted, the exotic with the everyday to make his collection wearable.

“It’s a clash between the masculine and the feminine, precious fabrics with really day fabrics, because at the end it’s clothes to wear today,” he explained.

His patchwork collection of rocky leather biker jackets with de-constructed panels was a nod to the house’s namesake.

The masculine shapes did not dampen the sex appeal of thigh-high slits and oval cutouts, all accompanied by sky high leather boots while a sombre palette of blacks and blues gave the collection a dark, romantic vibe.

French designer Christine Phung kicked fashion into the digital age with her show on a top-floor gallery of Paris’ glistening Arab Institute.

“Glitchology” is the name she gave to her collection which took its inspiration from the digital glitches and bugs which so aggravate many people but which the designer contends creates moments of beauty in the modern world.

The curtain came down on the show as a slouchy silver belted shirt dress followed a traditional wool suit in varying shades of grey with all the models lining up to take applause followed by brief appearance from the designer.