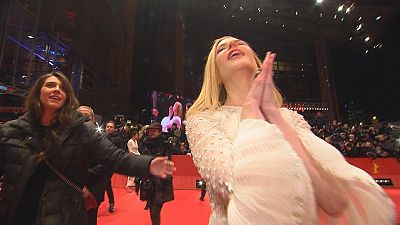 The 65th edition of the Berlin International Film Festival was one of the most glamorous yet. Among the stars gracing the red carpet were Nicole Kidman, Damien Lewis and Nathalie Portman, while some of the biggest names in the industry were competing for the coveted Golden Bear award.

The weather gods were kind to us and, I have to say that, for me, it was a brilliant Berlinale because we featured a wide variety of films, with many different styles of production.

Festival Director Dieter Kosslick summed up how he felt at the close of the Berlinale.

“The weather gods were kind to us and, I have to say that, for me, it was a brilliant Berlinale because we featured a wide variety of films, with many different styles of production,” he said.

American director Darren Aronofsky was the President of the International Jury. He and his panel were tasked with judging 19 films from around the world.

As our correspondent Wolfgang Spindler noted, Aronofsky is well-placed to assess the nominated films.

“On several occasions, the President of the International Jury Darren Aronofsky has praised the quality of the films in the competition. As a director who has won many international awards for his own work, he certainly knew what he was talking about,” he said.

Panahi is banned from making films and forbidden from leaving the country, so his niece – who also appeared in the film – collected the award on his behalf.

The director turned a taxi into a film studio on wheels. He pretends to be a taxi driver and chats to customers, giving a cinematic portrayal of everyday life in Iran.

The Silver Bear for best director went to two people.

Polish film maker Małgorzata Szumowska was one of the winners. Her film ‘Body’ is about a coroner and his anorexic daughter who is grieving for her dead mother.

She takes part in group therapy with a woman who claims she is psychic and can receive messages from the dead.

“It’s a movie which is sad (and) at the same time it’s extremely funny,” said Szumowska. “Let’s call it black comedy, also, a black comedy about Poland.”

The second Silver Bear went to Romanian director Radu Jude. His film ‘Aferim!’ is a Western-style parable set in Eastern Europe in 1835.

A ‘gypsy slave’ who has run away from his master and is suspected of having an affair with the nobleman’s wife, is hunted by the police.

‘45 Years’ tells the story of a couple whose marriage breaks down within a week, right in the middle of the preparations for their 45th anniversary celebration.

It’s a portrait of an elderly couple which hails from a generation where talking about feelings and fears does not come easily.

“The status quo sort of reigns, you don’t dig down to find out too much,” said Rampling.

“It’s in soap operas they say we have to talk and they talk. But in real life, especially men… Women like to talk more than men,” added Courtenay

Ukrainian-born French actress Olga Kurylenko was invited to be on the jury for the Best First Feature Film.

Our correspondent asked Kurylenko how she felt about judging other people’s work.

“Well, its interesting because you actually learn a lot. I really enjoyed the experience,” Kurylenko replied. “It gave me more ideas, because I am into writing my own scripts, and it made me understand what really sometimes doesn’t work… And it’s good for me.”

The Best First Feature Film award went to director Gabriel Ripstein and his producers, Michel Franco and Moisés Zonana, who will split the 50,000-euro prize money equally between them

Their film ’600 Miles’ featuresTim Roth as Agent Hank Harris, who is tracking young gun trafficker Arnulfo Rubio between the US and Mexico.