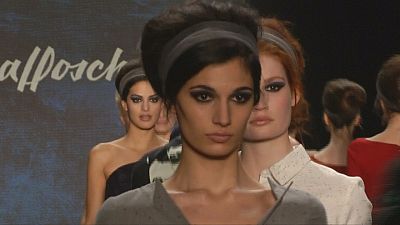 Designers Maria Grazia Chiuri and Pierpaolo Piccioli were inspired by the 1920’s Russian ballets for a collection featuring geometric patterns and contrasting colors.

The patterns were created with the collaboration of the Australian artist Esther Stewart.

Geometry and naturalism were the dominant themes of the show, with big zipper coats in shades of blue, gray, red, pale yellow, and burgundy.

Raf Simons took a page from his high school days with his showing at Paris.

The designer’s Autumn/Winter line was injected with a rebellious 70s teen spirit.

It featured lab coats smeared in black scribbles and long coats with hems that appeared to have been cut by Edward Scissorhands.

Although Berlin Fashion Week attracts fewer big names than the corresponding events in New York or Paris, it has become known for showcasing upcoming designers, some of whom go on to become highly successful.

The collection had a 1970s feel and featured high-waisted A-Line skirts and trousers.

Dresses with high collars and floral prints were teamed with under the knee stockings and block-heeled shoes.

Adding to the retro vibe were flared trousers and jackets with oversized lapels.

Austrian designer Lena Hoschek contributed to the retro theme of the show.