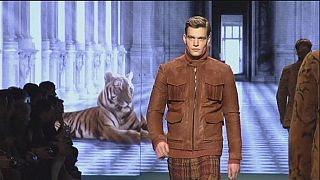 Gucci's androgynous collection at Milan's Men's Fashion Week appeared to be a tribute to French artists, intellectuals and revolutionaries.

The colours of the French flag – blue, white and red – were in clear evidence and many of the outfits suggested characters from France’s rich cultural history.

The collection also paid homage to the French Revolution with one of the female models wearing a military overcoat with brass-coloured buttons.

Vel Kean Etro will create a world of illusion next autumn. The label revived a slumbering colony of artists in Como to hand-paint rigorously the surfaces of the clothes in its Autumn/Winter collection.

They looked printed but each of the garments had, in fact, been transformed by a single painter’s careful brush strokes.

Armani showcased a tactile and comfortable collection of mainly dark clothes for Autumn/Winter 2015.

The suits were short, and included a tight jacket with smaller lapels while the trousers took on a loose, casual fit.

Paris is the next stop on the fashion calendar, with menswear shows beginning there later in January, 2015.