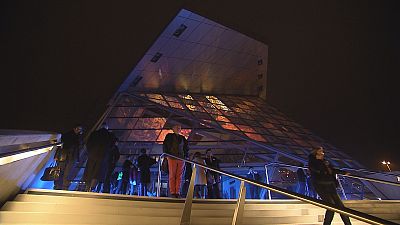 A colossal building of glass and steel – more than a decade in the making, and nearly 300 million euros later, Lyon’s new Musée des Confluences has finally opened its doors.

In the Musée des Confluences, we have decided to break the rules and allow visitors to touch authentic artifacts. Because there is always this dream, when you visit a museum, of being able to touch items on show

Impossible to miss, it is located at the southern entrance to the city where the Rhone and the Saone rivers meet.

“This museum carries its name very well. Beyond its geographic location, it really is a meeting point, a place that offers exchange, a fresh perspective, the intelligence of a new outlook because we take a cross-cutting look on our collections and all our subjects are treated in a multi-disciplinary manner,” says the museum’s director, Hélène Lafont-Couturier.

The Musée des Confluences contains a unique collection of 2 million objects from every continent with the aim of “telling the story of humankind”.

“The questions we ask are philosophical, but are nevertheless accessible to everyone since they are questions which every individual, every society asks itself. Where does life come from? What are the origins of mankind? What are the origins of the universe and what is the place of mankind in this biodiversity? The organisation of societies, man and death… these questions are asked in each exhibition,” says Nicolas Dupont, head of collections and exhibitions.

One of the most impressive artifacts is the near complete fossil of a mammoth discovered just 2 kilometres away from the museum some 150 years ago – proof that the Alpine glaciers once stretched all the way to Lyon in the Quaternary Period.

Understanding the origins of the Earth through fossils, but also by looking up into space. Expect the unusual is the message from the the museum’s management;

“In the Musée des Confluences, we have decided to break the rules and allow visitors to touch authentic artifacts. Because there is always this dream, when you visit a museum, of being able to touch items on show, like this 630 kg meteorite for example,” says Nicolas Dupont, standing in front of the massive boulder on display at waist-level for anyone to touch.

The question of the origins of mankind is addressed in another large exhibition room containing a number of stuffed animals, which reminds us that human beings are just a part of a this massive biodiversity.

“We wanted to play with the idea that we often forget that man is a species like any another, one among 5,000 different mammal species, among 10,000 bird species. There are more than 200 species on show here in this spectacular exhibition room,” explains Nicolas Dupont.

Artifacts borrowed from cultures around world, ranging from the Inuits to the Papuan people and the Incas, are on show in the museum’s permanent collection, which ends with an entire exhibition room dedicated to a bold and relatively rare subject matter: death.

“Throughout our collection, the issues we address are very contemporary, so we always end on a very modern note,” says Nicolas Dupont.

“We take a journey through time with a very contemporary approach, and we conclude with a piece of art by a contemporary artist, like this piece by Lyon artist Aubanel (he points at the painting behind him), a vanitas, a “memento mori” that reminds you that, one day, you will die.”

Since its opening in December, the museum has seen a constant flow of visitors and is expected to draw hundreds of thousands every year.

Lyon’s Musée des Confluences – a landmark and a must-see for anyone visiting France's second largest city.