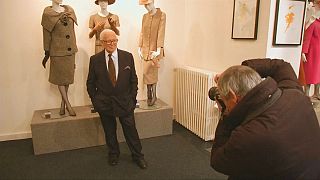 He is 92, a legend in the world of fashion and now he has a new museum in Paris. Pierre Cardin is one of the longest-lasting living French fashion designers and much of his iconic work is on show in the museum.

On show are designs which spanned his 70-year-career which began when he was just 14 working as a clothier’s apprentice.

He moved to Paris in 1945, studied architecture and worked with several fashion houses. Within five years he had founded his own house. The exhibits in the museum are a reflection of the man himself.

“Here you are able to see what I created in 70 years, and this is personal work that resembles me, which doesn’t imitate anyone, because copying is related to taste. Copying is not creating, it’s making something different, a different sensitivity. Creation can’t be discussed, you either love it or hate it. But this shows what I have inside me, my psyche, my will to create the shapes, the fabrics, the colours as I feel them and how I want to show them to people,” he explained.

Pierre Cardin, who is known for his avant-garde designs, rose to fame in the 1960s with his space-age geometric shapes and minimalist style. Here in the museum is evidence of his belief that fashion must constantly evolve.

“An evolution. I think fashion can’t be stable. There is a style that people either like or do not, but it has to change. Mine is ‘Present, Past, Future’, which means the future is not here yet but it will become the past,” he opined.