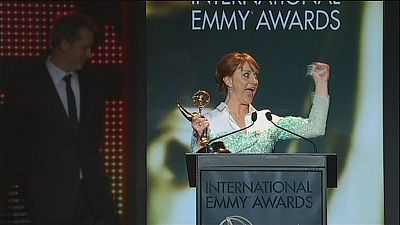 The British conspiracy thriller ‘Utopia’ has picked up an Emmy award for the best drama series.

The Channel 4 offering has run for two seasons and follows a group of people who find themselves in possession of a sinister manuscript.

Stephan Dillane star of the French/British productuion ‘The Tunnel’ won an Emmy for best actor.

He plays the role of a British detective on the hunt for politically motivated serial killer at the crossroads of France and the UK.

“Hello, I’m Bianca from Holland! I want to dedicate this prize to all the extras in this movie. They were real refugees.”

She plays Mirte a grumpy woman working in a refugee centre. Her encounter with a West African immigrant changes her life forever.

The ZDF TV series follows the story of a group of adolescents, whose friendships are shattered by war.