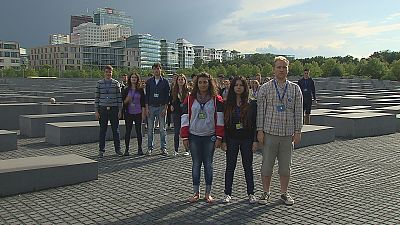 The Holocaust Memorial in Berlin is a powerful symbol of remembrance for the Jews who were murdered in Europe during World War Two. For many young people this is just something from the history books, but 19-year-old Haris Kusmic from Bosnia-Herzegovina has been directly affected by religious intolerance. His father was killed during the break up of Yugoslavia.

“The Holocaust which happened to the Jews could happen anywhere else in the world. It happened in Bosnia 50 years later, in Srebrenica. You never know who might be next.”

Haris is one of seven youth leaders who organised a 10-day seminar on ‘Democracy and Tolerance’ in Berlin. The organisers and participants came from seven different countries: Greece, Belgium, Norway, Luxembourg, Germany, Bosnia-Herzegovina and Armenia.

Narine, from Armenia, explained how it worked: “All the mentors and organisers are different and sometimes on specific questions we have different opinions and during the working process we started to be more tolerant towards each other’s point of view. It’s great to work with an international team.”

The seven organisers met during an international exchange programme and decided to organise something together by themselves. They applied for funds from Youth in Action, a European Union programme that supports multicultural dialogue among young people.

Each mentor prepared their own topic. Katerina from Greece organised exercises in public speaking.

To fight religious misconceptions, the mentors invited representatives from three religious communities, the Armenian Apostolic Church, the Greek Orthodox Church and Islam. This seminar was particularly meaningful for Ida Knudsen, a youth leader from the Norwegian Labour Party. She was one of the survivors of Utoya massacre last summer.

Knudsen told euronews: “With my experience in Utoya, I’ve really learned about tolerance and to tolerate, and that people are different. People have different cultures and religions, it is very important because you can’t believe that everyone has to be the same as you”.

Haris Kusmic said he hopes to pass on religious tolerance, which he says is very much a feature of everyday life where he is from: “In Bosnia, we have four major religions in such a small space, only 51,000 square kilometres. So for me religious tolerance comes naturally. I don’t have to try really hard to understand someone else. I just understand them”.

Utøya massacre survivor: 'I grew up in one hour'