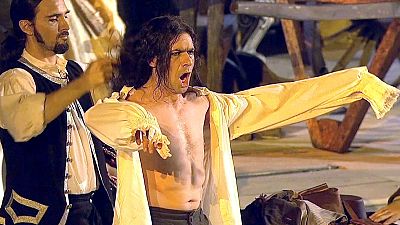 The poet E.T.A Hoffmann called Mozart’s Don Giovanni “the opera of all operas” and for the 90th anniversary of the Festival Arena di Verona, the director and stage designer is the world renowned Franco Zeffirelli. An opera giant himself, Zeffirelli has worked with the legends of the opera world.

Carmen Giannattasio, who is the soprano voice, was passionate about his involvement: “I’m in love with Zeffirelli and I think he is in love with me a little bit too.”

Ildebrando D’Arcangelo, the bass-baritone, was extremely impressed by the attention to detail: “I was touched when Maestro Zeffirelli called me a month before he arrived in Verona. He invited me to his home to discuss the character, look at the costumes and to get to know the precise version of Don Giovanni. I had never in my 23-year career received a call like that. I was moved.”

Performing there was a particularly special moment for Italian soprano Carmen Giannattasio and Albanian tenor Saimir Pirgu; they have an affinity with Verona having both lived in the city.

Tenor Saimir Pirgu told euronews: “It’s quite frightening, that’s the first thing, you see these people and then suddenly you have to sing. It’s scary then after three or four seconds you feel the projection of your voice through this huge space and the song relaxes you and do your best.”

Don Giovanni is a complex story of love and revenge in which Saimir Pirgu plays Don Ottavio, who is desperately in love with Donna Anna.

Another female character, Donna Elvira, is suffering from unrequited love as she has been callously dumped by Don Giovanni.

Soprano Carmen Giannattasio explained: “I love Donna Elvira probably because she is not so far from me. She is very passionate, she is very jealous, possessive a little bit. I’m not so possessive and she is so in love with Don Giovanni.”

On stage there is an atmosphere of tension, but off stage the cast are friends and enjoy having fun.

This is the first time the opera from 1787 has been shown at the Arena. It is based on the legend of the womaniser Don Juan – alias Don Giovanni. He is a villain, murderer and a seducer.

Bass-baritone Ildebrando D’Arcangelo concluded: “I see Don Giovanni in this day and age as a character who seeks to fill the void and in his frenzy he seduces women, he is an escapist. I think Don Giovanni is in us all, it remains to be seen how it manifests itself.”

For more excerpts from our interviews (in English and Italian) with bass-baritone Ildebrando D’Arcangelo, soprano Carmen Giannattasio and tenor Saimir Pirgu please click on the following link: www.euronews.com