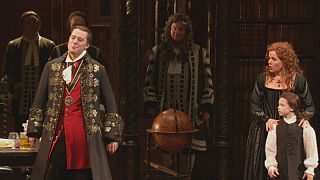 Bright lights in the big city and also in the opera world, with the Met production of Handel’s Rodelinda in New York. Composed in 1725, nowadays it is relayed on giant screens the world over. In the title role: top American soprano Renée Fleming.

She told euronews: “Rodelinda is so different from the other typical operatic heroines who are so often victimized because they are yound and beautiful. She starts the opera in tremendous trouble, in mourning, and in grieving, and she’s a mother. But she also shows so much courage, and she’s clever.She [is not] the simple ingenue that we sopranos typically play.”

It is a story of romantic and political intrigue. With Queen Rodelinda’s husband – the rightful king -believed to be dead in exile, the way is open for usurped power, passionate courtship, machiavellian plotting and the rediscovery of abandoned hope.

“The thing I love about Handel is that the music is tremendously emotional without being dense, there’s a clarity, a simplicity to the tools,” Fleming went on. “The acoustic quality of the instrumention, the strings with the harpsicord, and the improvisation element which appeals to me. And it’s intimate. So I love all those elements coming together but still expressing real truth of what it means to be a human being.”

“And the other thing that’s interesting about this opera, and it’s also atypical, is that the characters begin in a tragic situation and it has a happy ending, and very few operas do.”

“When I first sang the opera here,” said Fleming, “I even received mail from people who were somewhat disappointed: people come to the opera for a sort of cathartic cry, and one can have that in Rodelinda, but not at the end.”

For more excerpts from our interviews with British conductor Harry Bicket and American soprano Renée Fleming, please click on the following link: