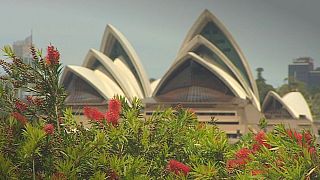 From the Blue Danube to Down Under; from refined, sophisticated Vienna to outdoorsy, hedonistic Sydney – the recent Antipodean tour of the Vienna Philharmonic Orchestra has been a huge success.

With Strauss to the fore the Philharmonic swept into Sydney’s opera house, bringing Vienna’s music and composers with it.

They included Anton Bruckner and his ‘Romantic’ Symphony.

“In the fourth Symphony, from the very first beginning, this horn solo is not a melody, it’s a message from a different world the composer couldn’t have described better in words. As Nikolaus Harnoncourt once said, Bruckner cannot be compared to anybody, he’s like a stone from the moon, he’s comparable to nothing before or after him,” says the VPO’s president Clemens Hellsberg.

Tobias Lea, the VPO’s principal viola, was born, bred and trained as a violinist and viola player in Australia. Bruckner’s Fourth conjures a particular moment for him.

“For me playing Bruckner tonight has a special impact because it was the first Bruckner symphony that I played with the Vienna Philharmonic. I remember the feeling of incredible exhilaration that I got the first time I played this symphony as an impressionable, young, 22-year-old student, and every time I do it again it brings back memories of how incredibly wonderful it was that first time I did it,” he says.

Conductor Christophe Eschenbach is a keen admirer of Bruckner’s piece.

“It allows me to express everything, from the most glorious moments in this music to the more ‘reflective’ things, even sad things, and from the joyous part of the scherzo to the enormous build-ups in the last movement, at the end and at the beginning – so it has everything symphonic music can offer.”

The German conductor was chosen by the Viennese musicians themselves. Admittedly, they have a lot in common.

“It’s a deep understanding of the essence of every piece of music, I’ve worked all my life on that, and I have nothing else more important in life than music, and it’s enough!” agrees Eschenbach.

Tobias Lea left his country more than 20 years ago, but he still feels profoundly, proudly, Australian.

“That’s what my country is so much about, it’s what I miss: I surf, when I’m not playing the viola I wish I could be surfing, that’s one of the biggest things I miss about Austria, that there’s no ocean — Australia has got it all!” Something the VPO’s Hellsberg would contest, no doubt.

“To compare Austria with Australia is ridiculous, because we’d be such a tiny part of this huge continent, but we see the fascination our music has on the people here. People are glad that we come all this way and play our Viennese music,” he smiles.

Brahms on the beach. Now there’s a vision!

In this item you can hear excerpts from the following works: